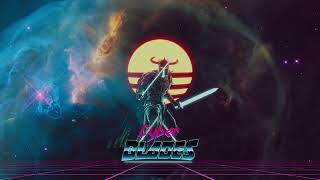 Cyber blades is a game where you fight back by slicing the enemy projectile with a melee weapon in a synthwave setting. It provides a unique experience that allows you to face hundreds of enemy archers with melee weapons. Slash arrows more powerfully, and get a higher score by cutting in a row!

Have you ever seen a scene in an action movie where a sword is used to cut bullets and strike back?

Cyber Blades is an intense Workout VR game in which you become an Action Star and fight back against the enemy Projectile, In a synthwave-themed world.
The game is challenging enough to burn your Cardio in a short amount of time and you have to constantly dodge obstacles and counter or defend against enemy projectiles.

ABOUT GAMEPLAY IN VR:
- You can try various styles of Run by holding boxing gloves, (reverse grip-able) daggers, swords, Mace, and shields in each hand.

- By selecting the player's hit points, you can exercise continuously regardless of being hit, or try a perfectionist run that doesn't allow even a single hit. Also, you can adjust the intensity of the exercise by adjusting the frequency of appearance of enemies by adjusting the difficulty.

- At the end of each run, the ferocious T-Rex is on the lookout for your life. Infested with fury, this beast unleashes a variety of patterns of Deadly Attacks against players.

Be the first to review Cyber Blades on VR GAMER!