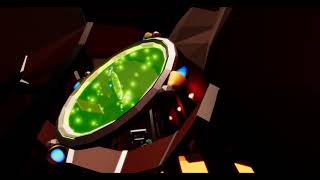 The first chapter in the VR Superhero platformer series I Hate Heroes! Play as a Rocket Man, a superhero trapped in the hell-prison of the greatest supervillain the world has ever known. Use your rocket thruster hands to zoom on the ground, grab massive air, avoid death, and collect keys to escape.

This game is not the only one of its kind! Well, for now it is, but more are on the way very soon! Each game in the I Hate Heroes collection features new, unique locomotion, inspired by superheroes. They are designed to be completed in 1-2 hours, with challenging obstacles that provide immense satisfaction when completed. We chose this format so that we can share with you many locomotion experiences quickly. Each title is designed as a standalone experience, so you don't need to play them in order.

As Rocket Man, you will be able to live out your flying fantasies in VR! In each hand you will hold a thruster capable of propelling off the ground. Use them to avoid obstacles and complete the courses by skating along platforms, climbing up walls, and making daring jumps.

Despite being trapped by the greatest villain of all time, you won't be stuck in boring or uninspired levels for hours on end. Instead, only six challenging levels stand between you and true freedom. Each level has a unique theme to test your superhero abilities. Take your best shot at collecting all the keys to escape the super prison. Revisit old levels to master the mechanics and achieve new best times!

This game was developed for the Vive and Oculus headsets. We have not tested the game on other SteamVR supported devices and cannot make guarantees on functionality. Motion controllers (e.g. Vive controllers or Oculus Touch) are required.

The I Hate Heroes Collection is developed by VRemedy Labs, a game studio based at MIT that loves VR and making games. Over the past two years, we have been experimenting with various locomotion methods and game formats. We are excited to share what we have found with you through this series.

Be the first to review I Hate Heroes: Rocket Man on VR GAMER!