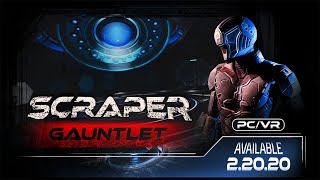 Scraper: Gauntlet is a VR RPG wave shooter featuring heavy weapon customization, unique missions and substantial enemy modifiers. You're an elite HRF Operative tasked with retrieving a highly classified weapon blueprint from a secret AI facility to fight back against the Humechs.

Scraper: Gauntlet features deep weapon customization through modifications and upgrades that players can mix and match to assemble their build. Each mission is a unique combination of levels, enemies, and mutators, leading to thousands of possible combat scenarios, each providing new opportunities for emergent gameplay.

- Combat robotic opponents who have access to over 30 mutators that change their strengths and capabilities, requiring advance preparations with builds and on-the-fly thinking during missions.

- Choose between 17 modifications that change your weapon loadout and defensive capabilities.

- Invest in 15 stats to create unique builds that enhance your favorite combat abilities.

- Experiment with 3 base weapons that have 9 unlockable variants: turn a machine gun into an auto-shotgun, or a grenade launcher into a black hole gun.

- Battle your way through an 8-hour campaign, facing off against unique bosses with behaviors and attack patterns that change as the fight progresses.

A New Entry in the Scraper Universe

Scraper: Gauntlet is a new standalone story in the Scraper universe, taking place concurrently with Scraper: First Strike. The megacities of the world are under siege by Humech forces. In an effort to turn the tide of battle, a leading AI scientist has devised a plan to recover highly classified weapon from an abandoned lab, a pair of advanced military gauntlets that house the latest in experimental munitions and reality-bending tech. Each Gauntlet contains three base weapons that are highly customizable and were specifically designed to counter Humech abilities.

Be the first to review Scraper: Gauntlet on VR GAMER!