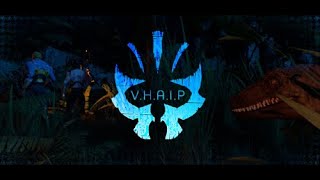 A thrilling VR game playable in co-op online or solo.
Survive to raptors in a deep jungle until the escape come.

Vhaip is an experience where the players will be chased by a raptor in a dark jungle, the player have to find how to survive.

-Tutorial to learn the basics, you will learn how to survive in vhaip and how to control a raptor.

-Game:
1 Player: You will play alone in the dark jungle of Vhaip and you have to try to survive and call help.

2 to 4 players, you can set the game to play against ai raptors or be the raptor against your friend/s.
Launch the game and the system determine randomly which player will be the raptor.

-Lobby fully configurable: AI or not - Number of relay - difficulty - number of enemy.

Be the first to review VHAIP on VR GAMER!