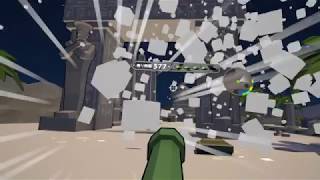 A large explosion if the bullet that fired hits an enemy tank! Feeling is exhilarating!

It's a gameover when To be attacked receives enemy bullets five times!

If you defeat the mid boss in each stage, last boss dedicated to each stage will appear!

If you defeat all the enemy tanks other than the fixed turret (Normal Tank, Mid Boss, Last Boss), It will be stage clear.

Manipulate the tank freely! defeat the tough last boss waiting for each stage!

- Training station stage: It's a simple stage where no boss tanks exist.

You can master the basic operation.

- Forest stage: This stage there are few obstacles.you can see around the stage.

Aim at enemy tanks from a distance!

- Urban Stage: A vast stage in the streets where parks and skyscrapers stand.

Let's not to miss Normal tanks.

It's a point that will give out a high score.

- Desert stage:This stage will release when all the other stages are cleared.

The tough last boss is waiting at the deepest part of the stage.

It's important to preserve the remaining your life.

Be the first to review Voxel Tank VR on VR GAMER!